The VIRUSKILLER™ VK 102 was tested by Canada-based CREM Co to determine its efficacy in preventing surface contamination. 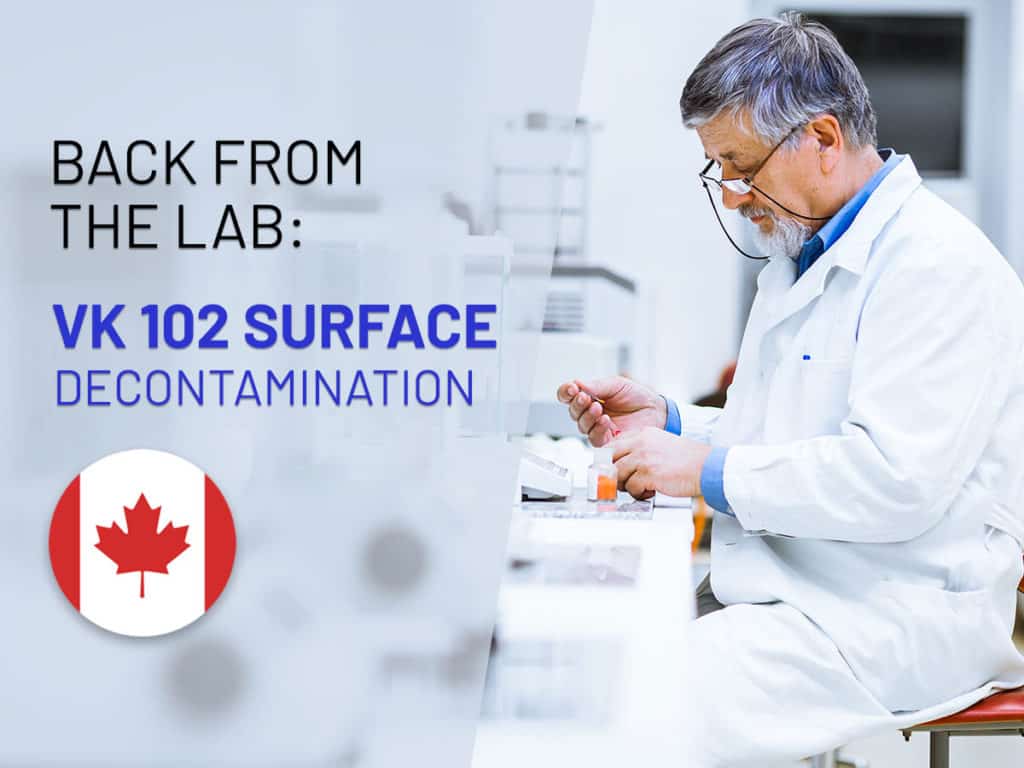 In the second round of R&D testing conducted by CREM Co laboratory the aim was to assess the efficacy of the VK 102 at reducing the risk of contamination of environmental surfaces by airborne enveloped viruses. The results are exceptional – demonstrating a greater than 99% surface contamination prevention rate after 30 minutes of exposure.

Using the same experimental design as their testing of the VK 102’s air decontamination performance, CREM Co used an aerobiology chamber consisting of a sealed 26m3 room into which a nebulizer introduced aerosolized pathogen. A fan ensured even distribution of the pathogen in the air within the chamber, into which the VK 102 was placed.

Two experiments were conducted to measure the pathogen counts of Pseudomonas syringae obtained from petri dishes, which were placed on the floor of the aerobiology chamber when:

In both tests, cystovirus-infected Pseudomonas syringae were nebulized into the chamber for 10 minutes, and the aerobiology chamber’s fan turned on to allow the pathogen to distribute evenly in the air.

In the device efficacy test, the VK 102 was switched on for 30 minutes after which the lids of the petri dishes were removed and the pathogens allowed to settle on the surface of the agar within the dishes for two hours. In the surface contamination test (i.e. the control), the same procedure was followed but the VK 102 was not switched on at all.

The efficacy of the VK 102 in preventing and/or reducing surface contamination was calculated by comparing the numbers of Pseudomonas syringae settled on the petri dishes between the two experiments.

The device efficacy experiment demonstrated that the VK 102 reduced surface contamination by over 99% after operating for 30 minutes, compared to the control experiment in which the VK 102 was not switched on.